iTunes help – Playlists: The Best of the Best

iTunes help – Playlists: The Best of the Best

If you have quite a bit of music, and you have rated all your songs (yes, this seems daunting, but there is a quicker way!) you will find yourself with a group of songs that have four and five stars. Now, currently in that list, I have 11,578  out of 29,204 songs in that list! You may think that is a lot, but take a second to consider that – that’s not even 40% of my music. I only listen to around 40% of my entire library! Weird, why have all that music if you listen to less than half? I guess you could say that, but I have really streamlined my songs to only listen to songs I enjoy on a regular basis.

However, lately I have found myself skipping songs. Why? I find that sometimes, even though I have rated a particular song 4 or 5 out of 5, I just don’t want to listen to it that day. So I took my submeg.fm playlist (see step two) and tweaked it. I went a step further and created a playlist that has ONLY songs that are rated 5 out of 5. This created a playlist with only 1,856 songs. That was more manageable I thought. Over the last few weeks however, I have found myself skipping songs again! I was a bit annoyed, as these were supposed to be the best of the best!

I had a think and considered if maybe all the songs that I had at 5 out of 5 were really worth it. I mean, if I’m skipping them, surely they can’t be? I decided against revising my ratings, as this would’ve taken ages. I had another think and looked at my play counts and realised that some songs had more skips than plays! So the solution became obvious – remove songs that had more skips than plays.

I then tried to do this in my !Submeg.fm – TOP SHELF playlist. I added an extra condition and selected:

Unfortunately, you cannot set the number of skips greater than the number of plays; it has to be a set number! I thought that I wouldn’t be able to do this; until I remembered the way I created my scientifically random playlist (will have to post about this one) and it sparked a thought – because I have to specify the number of plays and skips, I could do this for each number. See what I mean:

This collates all songs which have a 5 out of 5 rating, where their play count is one and the skip count is greater. This only works for songs that have one play however! I then replicated the above playlist for songs with 2 plays, 3 plays….you get the picture. I decided that once I got to 24, it was enough. Once a songs obtains 25 plays, I think it has paid its dues and can be free from scrutiny. So after creating twenty four new smart playlists, my !Submeg.fm – TOP SHELF playlist has become: 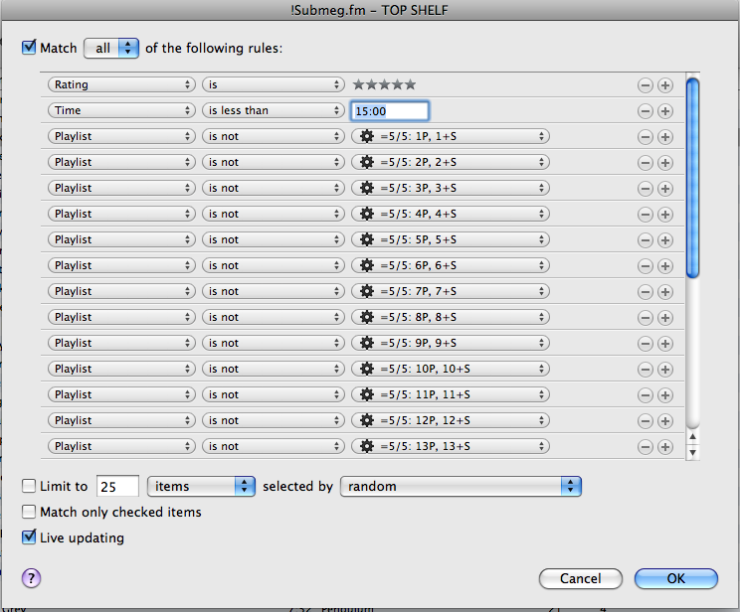 Now my TOP SHELF playlist has been cut down to 1763 songs and if I ever skip the song more than I play it, it is cut from my TOP SHELF and put back into my Submeg.fm playlist only. Quite useful!

Come check out the directory for the rest of my iTunes tips!

Musician, Writer and Inspirer. I discuss the projects I am working on, the services I provide and my general thoughts.

One thought on “iTunes help – Playlists: The Best of the Best”

Tell me what you think! Cancel reply